“Crisis is perhaps the most generative thing of all—the forest fire necessary for new growth—for how many of us change unless we are forced to?”

For Aries season, we share Johanna Hedva's 22 Moons transmission on The Tower, the major arcana ruled by Mars, “the culprit of sudden, unexpected accidents; injuries to the head. I like to point out that Aries, the first sign of the zodiac, which happens on the spring equinox, cracking through the ice of winter to begin the new astrological year, is ruled by Mars.”

The Tower is the card of punks, that special kind of punk who knows how to build a bomb out of wires and old batteries and sets it off for the insurrection of it, but also for the lulz. The Tower is “NO FUTURE” stick-and-poked onto a face. It’s that one guy in the pit at the hardcore show, shirtless, rabid, wet eyes rife with a menace that makes everyone around him give wide berth because you know that, tonight, he wants to break himself, and if you get in the way, you’ll get broken too.

The Tower is the major arcana ruled by Mars. Red planet. Ancient god of violence, rage, and war. Mars is virility, physical strength, force, warriors, athletes. Today, his reign would include guns, bombs, combustion engines, and teargas. In appropriating Mars from the Greek war god Ares, the Romans tried to smooth over Ares’ deranged bloodlust (he demanded sacrifice in the form of puppies), but Mars is still savage, from and of the wild, deity of thunder and storms, in some myths he rides fire-breathing horses. In astrology, Mars shows what will incite a person onto the metaphorical battlefield and what weapon they will use when they’re on it. In death transits, Mars is the culprit of sudden, unexpected accidents; injuries to the head. I like to point out that Aries, the first sign of the zodiac, which happens on the spring equinox, cracking through the ice of winter to begin the new astrological year, is ruled by Mars.

To begin, to begin anything, we need a spark, a flame, a big bang, a fist punching through a wall. 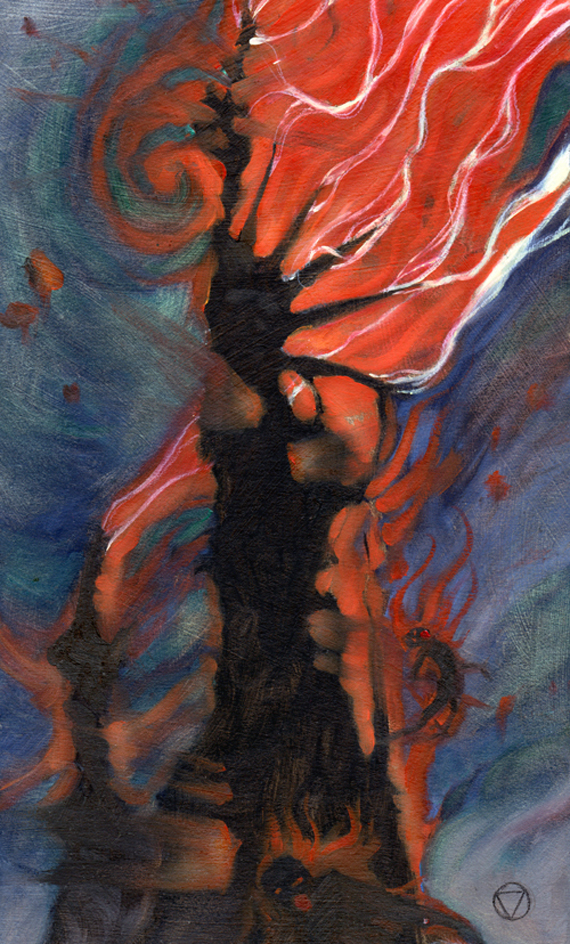 It’s masculine, but it doesn’t only belong to men. The Greek goddesses of vengeance, the Erinyes (which the Romans made into the Furies), are archetypally martial—when a crime has occurred, they transform into shrieking winged creatures with blood shooting out of their eyes, tormenting the perpetrator until he (almost always, he’s a he) is brought to justice. The Tower is Medea killing her children and Jason’s new wife—not because of jealousy, but because, by divorcing Medea, Jason rendered her and their children stateless: murdering them was a political act. I imagine, if Medea had had her cards read then, The Tower would have appeared.

After the 2016 US election, I started wearing a pin on my lapel of The Tower card.

As much as it is destruction and chaos, it is also generative. Crisis is perhaps the most generative thing of all—the forest fire necessary for new growth—for how many of us change unless we are forced to?

The Tower’s chaos is far more upheaving than the wisdom and conclusion of Death. When it came up in a reading for Asher Hartman around a new play he was working on, he said, with relief, “Oh, good,” and this changed everything I thought I knew about how to approach The Tower. Asher told me that he hopes to get The Tower when he’s making something new, because that’s how he knows the work is going where it needs to, and that he should keep following it.

As an artist, feeling like you’re falling from a great height with your head on fire is a sign that you’re being propelled forward by something vehement, explosive, something that’s crackling alive and blasting apart the ground beneath your feet, and what else should an artist hope to be guided by than a force with enough rupture to raze everything to the ground?

What are you doing with your art if it’s not blowing shit up? I’m not talking about just any shit—The Tower is not simply chaos, it’s institutional chaos, and it has actual, material consequences: the thing on fire in The Tower card is the tower itself.

And remember: after The Tower, when you’ve landed in the charred field, and the horizon is now visible in all directions, the space liberated, flattened, purged, in the emancipated vacuum that arises after a great disruption, you can see the Star.

Johanna Hedva is a Korean-American writer, artist, musician, and astrologer, who was raised in Los Angeles by a family of witches, and now lives in LA and Berlin. They are the author of the novel, On Hell (2018, Sator Press), and their album The Sun and the Moon is a Pisces, born in 2019. In September, they will exhibit new work in London, as part of parrhesiades, that includes astrology readings of different kinds of mystics, from Simone Weil to Nine Inch Nails.

New Moon Tarot Spread: This New Moon in Aries, this tarot spread by Sabrina Scott guides you to connect with the moon's cycles in order to release old patterns and make space for new blessings.

Hildegard's Healing Recipes: “Your food shall be your remedy.” Hildegard's medieval recipes for inspiration for your own healing practices.

Spring Equinox: Magical Plants for Healing, Balance and Immunity: As well as seeding and nurturing plants, now is an important time to enhance your self-care for the days and weeks ahead through ritual, intention-setting and clearing your energy.

Soji: A Meditation on Zen Cleaning: "In Japan, cleaning is called ‘Soji’ and valued as a way to cultivate our minds. In fact, Soji is beyond mere cleaning. Buddhist monks in a monastery put more time into practicing Soji than into practicing Zen meditation."

Daily Practice Guide: The establishment of daily practice, a devotional rhythm in life through ritual and routine, is the bedrock of a magical practice. Dedicating yourself to such a practice can benefit your consciousness, health and general well-being.

Please consider supporting small presses and independent bookstores in their ingenuity and passion at all times, but especially in this current moment.